It’s November. This means 95.1 FM is now playing Christmas songs 24/7. I turn the car radio on and, in shock, quickly change the station; only later to return to the Christmas tunes, and continue to listen to them the rest of the day. I don’t know how I feel about this.

But it doesn’t feel at all like Christmas, or maybe it feels like Christmas in Australia, because the sun is still warming us to the mid 60s. There’s just enough bite in the air to be exciting and make me feel guilty for not getting outside. And even though I’ve got piles on my desk, there’s really only one thing I’d like to be doing right now...biking. 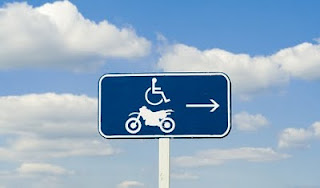 I’m not talking spandex; I’m talking leather. I was introduced to my first motorcycle several years ago when I met Mike at the 40 and 8 on blues night. The 40 and 8 was my first real introduction to the blues; no cover charge to a smokey room of grass roots blues, black folk and white folk sitting together at long family style tables, all tucked away in a dark forest.

I was meeting someone who never showed up, but I noticed a lanky dude with long hair and a T-shirt that said ‘PLEASE TELL YOUR BOOBS TO STOP STARING AT MY EYES.’ One person in this room I definitely don’t want to talk to, I thought. By the end of the night, he had my number.

I met up with Mike the next day. He was waiting on his bike, and told me later, he didn’t know I only had one arm till I stepped out of my car. Within five minutes, we were leaving the parking lot on his bike, and ten minutes later, I was in love...with the motorcycle.

It wasn’t long before I was a serious addict. Sitting astride the Honda Shadow, I absorbed the power beneath me and the scenery like a picture book we’d driven into. I thrilled to every turn, when we and the bike leaned like one toward the earth. The smell of cut grass, sun on the pavement, and scents passing too fast to identify woke m 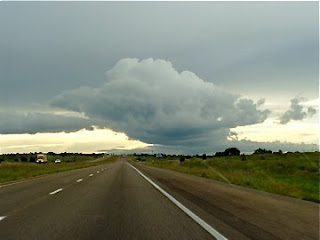 e; as if driving a car, I’d been dead the whole time. A former zombie, I saw others driving beside us, yawning behind the wheel.

Stopping at a light, Mike’s long legs touched the ground, his hand resting on my leg. I felt safe, which was odd considering, in addition to his poor taste in T-shirts, Mike was deaf in one ear and slowly going blind in both eyes from glaucoma. When I met him, he said he was traveling around the United States, to see as much as he could see before he couldn’t. I think that’s why I returned his call. It was too perfect: the deaf and blind biker hits the road with a one-armed girl.

And I took to the bike like I was born on the seat. The driving motor shot up through my boots and sent shivers down my back; it drowned my mind to a calm; but if I had to say something, I leaned forward and yelled into Mike’s good ear.

He took a job in South Carolina, and after a conference outside of Atlanta, I met him at a Target in Savannah. He introduced me to fellow bikers Bob and Lisa, then took me back to sleep in his small trailer at the junkyard where he worked. We slept side by side on a wooden loft; he never pulled his arm from beneath my neck. Moving suddenly, I knocked his hearing aid out of his ear, popping it in half. “Oh my gosh, I’m sorry!” I said in disbelief. Mike sighed. “I’ll have to buy another one.” Then, the edges of his mouth curling up, he stuck it back together.

In the morning, I drove to a gas station to find a toilet, then moved to Bob and Lisa’s place where I luxuriated in a real bed. In addition to biking, Bob and Lisa once rode their horses to Walmart and tied them to the cart return pen. I couldn’t imagine a better idea. Bikers seem the next best thing to cowboys, and 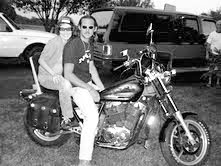 On the back of Mike’s bike, I learned to disdain Harleys, though I’m still not sure why, and roll my eyes at crotch rockets, which Mike called “asphalt decoration.”

We hatched colorful plans of biking across the country, stopping in tiny towns, working odd jobs, sleeping under the stars, and staying just as long as we liked. But I knew, somehow, the end of the road was coming. Mike had a wounded heart that I was incapable of fixing.

Back in the north, it got colder. Biking was torturous, and finding common ground was getting difficult. Dropping me off one night, Mike teased, “I think you like my bike more than me.” I shrugged; there was nothing to say.

I haven’t heard from Mike in a long time. The last I knew, he was traveling down south in an RV, my picture in his rearview mirror. I still smoke cigars sometimes because he taught me how on a bitterly cold, windy day outside the special collections library; sometimes I think about his broad shoulders and how he would do anything for a friend.

I visit Pete at the shop where he’s working. He and Chris, the owner, discuss what type of bike that would be best for a one-armed girl and what kind of modifications I would require, while I try to understand words like ‘jewelry’ and 'heel shift lever eliminators'. Chris tells me his father came back from the war without legs and wanted a bike made that he could drive, but none of the manufacturers took him seriously. Then good ol‘ Honda built one for him with three wheels. Chris and Pete both agree I’d look great on a trike. 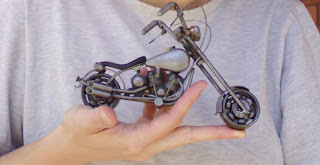 But I’m dubious. I miss biking, especially on warm fall days like today, but the more I think about it, I’m not sure about having my own bike. Maybe I’m not that kind of biker chick.

“Well, I could drive my own bike,” I tell Chris with a smile, “Or, I could just get a boyfriend with a bike.”

I've still got my helmet in the closet.