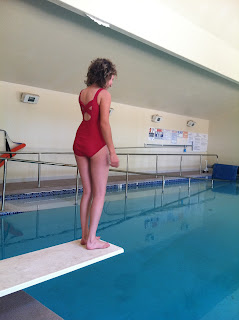 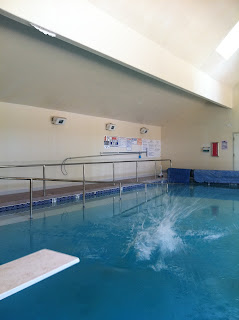 Last summer, I went on a serious shopping expedition for a bikini––a huge transition in itself due to my conservative upbringing and a niggling awareness that a bikini is merely colorful underwear, yet somehow socially acceptable in public. But after months of searching, I'd found nothing suitable (ha ha ha, suitable!) Ahem. So, I bought a one-piece suit of a hot pink shade, I'm not sure why.
But I still longed for a bikini, in the way only a girl who's been denied that sort of liberation with her own body can. And no, I don't think Hooters is a place to explore female empowerment. Then, long after I'd given up hope, I stumbled upon a sale, and a bikini that I liked. Unfortunately, due to limited inventory, it was about one size too big. But it was $15, which in bikini world, you might call a heck-a-va deal. So, I bought it.
I wear the bikini, t-shirt free, which is about the most liberated I can get--though I have to wear it circulation-constricting tight to make sure it stays on. And I'm always slightly nervous that wearing an over-sized and water-logged bikini isn't the smartest of decisions. And now I have the bicycle tire to think of. This might be enough to send me back to the (shudder) stone age t-shirt era––just when I was starting to enjoy my body. The only consolation is that when I dive in and my suit remains on the surface of the water, no one will be looking at my tummy!
So much for late-bloomers.
OneArmGirl
Posted by OneArmGirl at 5:56 AM 4 comments: