There's so much wrong in the world today. But when life's got me a little down, I just think, "Hey, at least I'm not a stuffed toy whose arm got bit off by a dog." 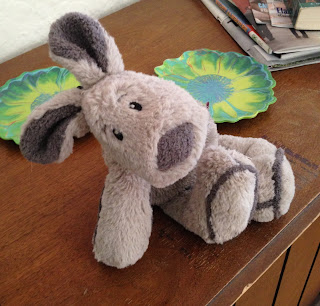 Yes, ironically, it was this poor rabbit's left arm that Keeper decided to attack in a fierce tug of war. By the end, there was not one thread left attached, the wayward arm floating solo across our wooden floor.

There was really no saving it.

But when I saw that, with a large hole gaping where the arm had been attached, the forlorn bunny was being quickly disemboweled one piece of stuffing at a time, I sprang into action to stop the carnage.

Now the semi-stuffed bunny is an amputee, but I hate to say, as Keeper's favorite toy, it's merely a stop gap measure. If it's not his other arm, or a leg, it'll be his ever elusive squeaker...

And what is it with the growing population of one-armed rabbits around here?