I went to see Cirque du Soleil recently for the first time. I was enchanted by the aerialists to which I aspire, but was most intrigued by one dancer who danced on crutches the entire show. 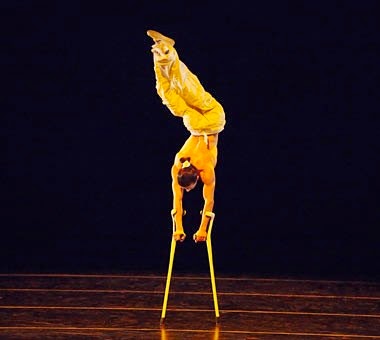 I found myself wondering if he actually had a physical impairment that required the crutches or if it was just part of the show. His moves were so smooth, his transitions so seamless, he seemed to almost fly around the stage.

But a hunch sent me to Google the next day. His name is Dergin Tokmak. From Germany, Tokmak contracted polio when he was a baby, but dreamed of becoming a dancer--influenced most heavily by breakdancing.

When he learned Cirque du Soleil was actually looking for a dancer on crutches for the 'limping angel' in Varekai, he decided to audition. Now he's touring the world.

I guess it's tempting to be impressed by how much someone with a physical disability has accomplished in the dance world, but I wonder how many show-goers don't even know Tokmak is handicapped.

Rather than dancing in spite of his handicap, his dance seems inspired by it. His uniquely strategic, flowing movement is made possible by the crutches which, like wings, carry him just above the stage.

The angel's limp has become a dance.