i'm not dancing, i have an itch

I watched Inception last night, ostensibly for the first time. But in reality I had seen it before during my fourteen hour flight to India, after a beer, and between two other movies. Basically, I was only half conscious. So when I put it on last night, I suddenly remembered the last scene of the movie, like I'd dreamed it before. Weird.

Speaking of India, I had a call from Pascal this week. He said he's been keeping up with my blog. He wondered if I would write about missing India.

"But I'm not putting myself down. That's why I write about it."

"It's just not nice. You have to love yourself."

"But I do love myself, that's why I can write about it."

"There was this guy missing an arm..."

"Which arm was he missing?"

"Well, was it the right arm or the left arm? That's very important, especially in your culture..." I said, teasing.

"So this guy with one arm goes up on top of a building to jump off...

"Because he's so depressed..." I offered.

"...but when he looks down," he continued, "he sees another guy missing two arms dancing in the street."

I waited for the moral, but Pascal just laughed. So, I guess I just won't jump off a building.


---------------------
Maybe Pascal was just reminding me to count my blessings. I went to the dentist yesterday and I have no cavities, so I'm off to a great start.
I told the hygienist about my book and she said, "I think it's good to read about other people's struggles, because it makes you grateful for what you have."
"Ah, ha," I nodded, my mouth full of fingers and tubes.
"Like 9/11," she said, "but we forget so quickly."
"Uh, huh, haaa," I said. She took her hands out of my mouth.
"What?"
"But I think forgetting is human," I explained, "it's how we go on, how we survive."
"Yeah, that's true," she said, "my husband had to tell me to stop watching the news because it was making me depressed."
It's just a theory, but I don't think comparing suffering ever really makes anyone feel better. More importantly, knowing the struggles of another reminds us we have something in common. It brings us together.
And what do we do once we get there? After last week's post, a couple people contacted me with possible solutions to my ponytail-making dilemma––interestingly, both of them were men. I understand my inability to make a ponytail is hardly on the UN's table of world crises, but the kindness was felt. 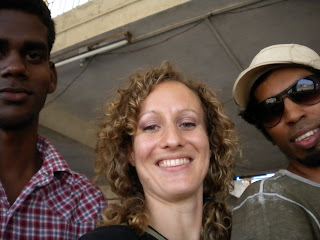 It's good to be grateful, but maybe not because we don't live in poverty or don't have a terminal illness. Maybe you don't have to stand on top of a building or feel guilty because someone else is worse off. You probably have enough dirty dishes in your sink to deal with.

There are plenty of people trying to be Atlas under the globe, wondering how we achieve world peace and personal happiness. So, in the meantime, if you know someone without arms with an itch, just scratch it.

And yes, India, I do miss you.