close encounters of the one arm kind

Chewy the Chihuahua's owner said there was a young man called Robin who was a regular at the dog park. He had dreads and one arm, she said. So when a young tattooed man with long blond dreads and one arm arrived at dusk, I knew it was he.

I steeled myself for an encounter. I may have mentioned the awkwardness for me of chance meetings with one-armed strangers, particularly if they have a Finneas lookalike. Suddenly there's an elephant in the room or, in this case, a much smaller, though similarly obvious abnormality. Part of me wants to step right up and say, "Hey, what are the odds, we both have one tiny arm!" And part of me wants to run and climb into the nearest linen closet. 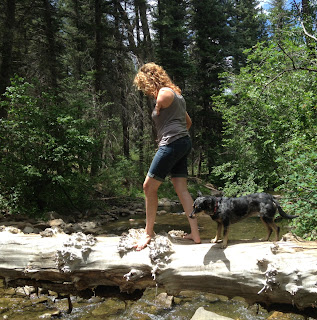 Depending on where my chicken wing twin is on the spectrum of self-acceptance, the outcome of our meeting may vary drastically. But usually, no doubt because we are both acutely aware of curious bystanders, any sort of scene is kept to a minimum. At most, we may share a furtive smile and nearly imperceptible nod, like you'd expect from the leading cowboy in a Western.

I find my one-armed comrades are generally introverted. The one exception that comes to mind is my friend Andy from England, who has no qualms about his three affected limbs and, if there isn't a handicap accessible restroom, will jump on the back of his nearest burly friend and ride off to the loo like a knight into battle. Needless to say, he likes the attention.

As I mentioned, it was getting dark at the dog park, so it was rather unlikely that Robin would notice me at all. But in an effort to become more like Andy, I waited for Robin to walk by, trying to act casually interested in Keeper the dog. I think he must have noticed, but Robin barely glanced at me as he strolled on, very much intent on the task at hand--cleaning up dog poop that less conscientious owners had left strewn about the park. He barely looked up from the ground, in fact.

It was most anticlimactic. But I was a little relieved. That is, until I got to my car and found I'd locked the keys (along with my purse and phone) inside. It might have been the perfect opportunity to introduce myself to Robin, but I'm an introvert, so guess who walked home with her dog in the dark.