I lied. I am not a one-armed girl. I actually have one arm and 1/4 arm, a subtle yet significant distinction that my friends are quick to point out, lest I elicit too much sympathy. However, I feel, as titles go, “One Arm Girl” is a bit more catchy than “One and One Fourth Arm Girl.” Yes? Alright. Are we all still here? Retractions over, I would like to introduce you to Finneas, my left 1/4 arm. 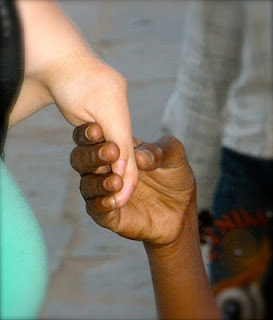 I realize naming your appendages is not normal, and I would like you to know that I am not personally responsible for this. My friend Lucinda decided my arm had too much personality to remain nameless, and decided on Finneas, which I understand is the blanket name for cab drivers in Zimbabwe, akin to Jeeves among butlers. Lucinda’s husband is from Zimbabwe, so I’ll have to take her word for it. And I like Finneas, though I’m not sure how to spell it. It’s a better name than ‘little arm’ or ‘flipper’ or ‘What the hell is that?’; other descriptions employed. Ok, so I’ve never heard ‘What the hell is that?’ said to my face, but I’ve definitely imagined it.
Hidden under shirt sleeves for most of my life, Finneas is about eight inches long (I’m really bad at estimating, so he might be anywhere from five inches to a foot) with three fingers attached by skin, so they cannot move separately. From the best I can make out, what I have is a miniature deformed version of an upper arm attached to a hand. Interesting to note that, apparently, your hand develops in the womb before the rest of your arm, because I’ve seen other people with small hands attached at the shoulder. No one knows why my left arm never fully developed, though from time to time my mom confesses that she had one glass of wine a 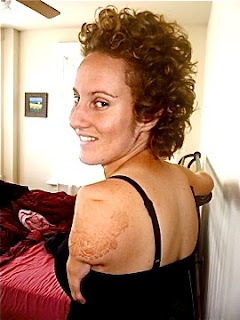 nd a Tylenol during her pregnancy with me. I generally look sadly at the floor and shake my head, “Yeah, that probably did it. Will you buy me a car?”
Finneas certainly deserves a name since he helps me with most everything that I do, primarily by holding things like milk cartons and books and small children; well, he can’t hold small children on his own, but he’s a team player. Lately, he’s been spending most of his time playing with the ends of my curls as they are now dangling long enough for him to reach. I’m hoping the novelty will eventually wear off. I recently found out how popular Finneas is while hanging out with some friends. It was raining and freezing, so I asked Ariel, who was sitting next to me, to feel how cold Finneas had become. When Kristen and Rebecca realized what was going down, both reached across the table to get in on the action. These are two of my closest friends and I had no idea getting to touch my small deformed arm had been a hidden dream, or how close I was to making that dream a reality. I do what I can.
And that’s just the beginning, but I’ve already written more than I intended. A quick note of appreciation: despite our rough start, and your probable decision not to trust anything I say from now on, I am ecstatic to see that I already have five blog followers, though I have yet to discover what exactly that means. And even more of you stopped by and left kind comments. This came as a surprise since I was mostly hoping my mom might read it from time to time.

(Also, my hair in the above photo was going through a bad time)