I'm intrigued by the search key words that are bringing internet surfers to my blog..."born with one arm," "one-armed woman," "one arm lady," "vaulting practice barrel," "sex in tattoos,"...and my personal favorite, "personal stories on convincing people not to get a tattoo." Well, I guess that answers that question.

I'm slightly alarmed because a) No matter what words I type into a search engine, I can never find my own blog, and b) Someone found my site with "sex in tattoos." So, lest you think my life is all sex, tattoos, and gory horror films, I present some other things appearing regularly in my world... 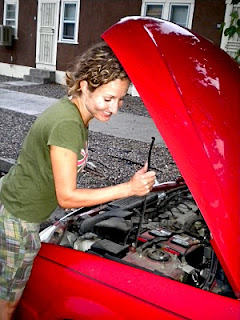 My little red Mazda is my silent partner, taking me to horses and groceries (both essential to my well being) and anything else that comes up in between. This is how a one-armed girl puts window washing fluid into her car...pop hood, lift hood, prop hood on head while securing the prop. Then proceed as normal.

I love to drive. I got my license when I was fifteen and I still thrill to the privilege. Early on, someone suggested I get a knob on the steering wheel like truck drivers use to make turns easier. I didn't get one then because I was too proud, and I don't have one now because, ironically, I'm too lazy...and still a little proud. My friends can attest to my routine use of my left knee on the wheel; and most of them are amazingly self-controlled, if a bit stiff, when we're careening around a turn with only my knee on the wheel. 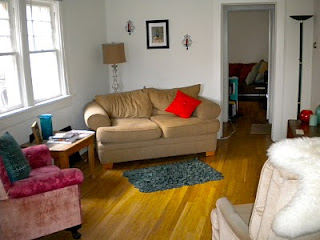 I spend a good portion of my life in my living room, especially now that it's too cold to be in the bedrooms, except for brief ventures of necessity, like getting underwear. I proposed that Little Gen and I move our beds into the living room for winter. "It will be like camping in the Third World," I encouraged. But Little Gen was not convinced. 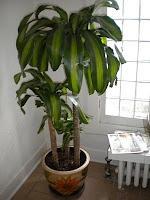 Sometimes I just walk around on the wood floors feeling happy. Wood floors have that affect on me; I feel grounded, which seems somewhat ironic considering wood comes from trees. I also like trees, as I've mentioned before. One day, I brought a neglected palm tree home from the closest home and garden store. Apparently, it didn't like fluorescent light. I named him Moses, and he's been a fixture in our living room ever since. 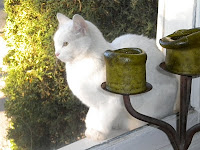 at the announcement of morning and assurance of things I depend on...I know it's safe to get out of bed.

Kublai is frequently seen about sunning herself on the wall outside our kitchen window or jumping up on our outside living room windowsill, causing me to jump and involuntarily throw whatever undeserving book I was holding. Flattening her white fur against the glass, she peers inside as if she's just as surprised to see me. Why she is named after a 13th Century Mongol Emperor is still unclear. 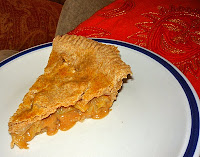 Last winter, I spent a lot of time indoors. One day, I made an apple pie. It was really good, so I made another one. And that was the beginning of Winter of the Apple Pie, in which I made, on average, an apple pie every two weeks. This phase bore a striking resemblance to the Semester of the Apple I had in college, though one can only surmise that my cravings are becoming more complex. It was an odd choice for me, not feeling a dearth of patriotism in my life, because I don't even like apple pie (or didn't). The key ingredient was lemon juice, I believe. And the secret is how a one-armed girl cuts and peels six to seven apples into small slices. I'll never tell. 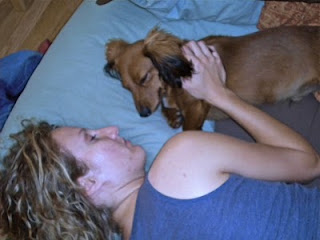 This is Desmond. He belongs to my friends Kristen and Ariel, but I was with them when they brought him home as a wee pup. Actually, he wasn't so wee; his breeders had nicknamed him 'Large' and he made cute congested noises when he slept. He's gotten a lot larger and healthier, but he still has the most adorable snore. I have never loved a Dachshund before, and I'm fairly sure there won't be another that will capture my heart like Desmond has... 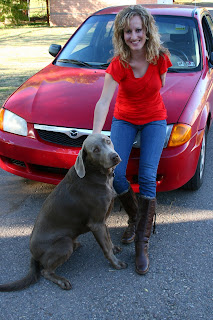 His only current rival might be a beautiful silver Lab Weimaraner. Dakota lives at the farm and he believes he's a lap dog. His affection is obnoxious and endearing, causing me to hate my own addiction to him. He is no help around the farm as far as I can tell, unless you call the periodic killing of a guinea helpful. When I'm trying to wrangle a herd of pygmy goats from the pasture to the barn, Dakota sits curiously, watching me from the porch. He's given me ample evidence for the benefits of a herder over a hunter on a farm.

So, it would appear that my life revolves around...my apartment, plants, and animals. Hmmm...looks like I'm well on my way to cat lady.
If you stumbled on this blog while looking for sex and tattoos, my sincerest apologies.

This post brought to you one day early due to tomorrow's concurrence of Thursday and travel for the OneArmGirl.
Posted by OneArmGirl at 12:15 PM 3 comments: