I don’t know if it’s coincidence or not that I started back into a project this week that lay dormant all of last year, and, on the same day, inexplicably put my right leg into my pants first, when I always start with the left. 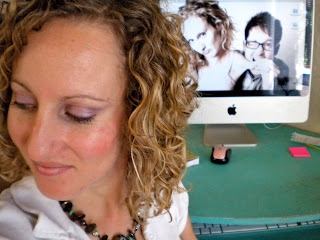 But what better time than Spring for starting new things. And it seems appropriate, as we approach the one year anniversary of TheOneArmGirl blog, that I go public with another project that’s still in the wings.

Curtain, please–I am writing a book! Tadaa!! For some of you this is not an announcement, but old news, and you’ve probably already given up hope of ever seeing it in print. But for those unaware, five years ago, also in the Spring as I recall, I decided that I was going to write a book. There is a great deal of garbage and life composting from which this idea grew, but it sprouted from the realization that my disability(s) were giving me a shit-load of material that couldn’t be ignored. And so I began to write, in the midst of upheaval, sitting on a mattress in my parents house, the frame having been already taken as they packed up the house to move.
The working title is Confessions of a One-Armed Girl. I tell people it’s not personal; a joke that hasn’t gone over especially well. Then I tell them it’s a collection of essays on the disability experience, specifically mine. When they nod sympathetically, I’m quick to chime in, “and it’s funny.”

One of the first essays I wrote was 'Joey’s Theory' because he shifted the spotlight onto what I most wanted to hide, leading to the creation of OneArmGirl. I loved to act, but now my handicap was
becoming the star.

I’d wanted to write a book forever, probably before I was even conscious of wanting to write. I wrote a series of chaptered books and self-published them when I was nine, but since then, nothing had materialized. From time to time, I’d open a new document with the best of intentions, but I never got more than a few paragraphs down before I got bored and filed it as a ‘work in progress’, never to be opened again. But Confessions was different. Ideas were tumbling out chapter after chapter, like it was coming from a wellspring I’d never tapped into. I knew the concept wasn’t mine because the last thing I’d ever wanted was to be associated with the handicapped. How could I have known I had so much to say?

Since the Divine push, I’ve worked on Confessions in spurts over the past few years, around writer’s block and other demands and delays of life. Then, a year ago, at 33 chapters and 144 pages of the third draft, convinced that it was all mildly entertaining rubbish, I decided to take a break. I was sick of my own confessions. I sent the draft out to some readers for feedback, which they generously returned, and I put the manuscript and feedback in a pile where they proceeded to collect dust for the next nine months.


However, with my book temporarily shelved, I finally overcame my fear of commitment, and started a blog; the very same blog you read today. Really, TheOneArmGirl.com is a reflection of the book, kind of a PR experiment. And largely because of my readers, the blog has encouraged and inspired, and even surprised me over the past year. I soak up the feedback like water on cracked earth.

And so, with renewed determination, I’ve taken Confessions off the shelf, and spread its bits and pieces over my tiny kitchen card table. It seems inviting, especially sitting atop the red and white checkered tablecloth, like a book writing picnic. I even borrowed a book of agents and publishers from the library, which makes the whole thing look much more official.

I don’t know where this is going to end up, but I hope you’ll join me on the journey, to eat an unhealthy amount of carbs when I get rejected, and to raise a glass of champagne when the time comes. Because it is you, who read what I write, that make it all worthwhile.

So, here’s to new beginnings; though I think I’ll continue putting on my pants, left leg first. Let's not get carried away.