a week of memoir

This is one of those weeks where so much has happened I don't even know where to begin. And then at the same time, nothing really concrete has happened at all. I'm thinking of working that into a title for my next memoir.

I went to the writers conference and was surprised to find that it really wasn't as intimidating as I'd imagined. But during a panel discussion with editors and agents, I began to feel like I'd signed up to pitch to the wrong person. 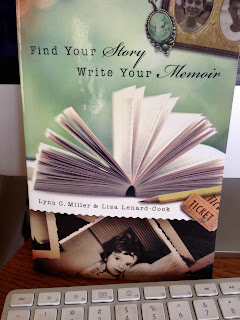 I felt drawn to an agent with Kimberly Cameron and Associates who, when I looked her up online [Thank God for iPhones], I found she had recently sold a book called Fancy Feet: How I Lost My Limbs and Gained a Life by Heidi Cave. Perfect, I thought––she knows how to sell a book about appendages, or the lack thereof.

I had ten minutes to tell her why she should represent my book. In preparation, I got a cup of coffee and stirred in as much non-dairy creamer as I could stomach. Then I scribbled an outline, which I promptly forgot about as soon as I sat down in front of her.

But I was almost disturbingly relaxed. The whole process was much like doing a mock interview in preparation for a job hunt. I told her what I had; she said what she wanted––and that was about it.

We ran over time and, in a moment of panic, I blurted out, "What makes me different is that I'm funny...like, I've thought about doing standup comedy." She perked up at this, but I'm not sure it was because I'd hooked her or she was afraid I was about grab onto her ankles and start begging for representation.

"Ok, when can you send me some chapters?" she said.

If nothing else, the writers conference (or, the W.C. as I just now decided to call it) re-lit the fire under my procrastinating bum. I've spent the week feverishly reviving a proposal and agonizing over which chapters to send.

I emailed my technical writer friend (Heidi, by coincidence) to proof the proposal; a hideous task in my mind, which she accepted like I'd given her a late Christmas gift. Then She forwarded an announcement that the author of Poster Child, a memoir essentially about a prosthetic leg, was going to speak about a new book at the University just just down the street.

So last night, I found myself sitting in a large classroom listening to Emily Rapp read from her latest memoir. It was almost too much for me. The Naked juice with spirulina sitting at my feet was more a description of my emotional state than what was allegedly rejuvenating my body at the cellular level.

I was insanely jealous, of course––also fascinated, trying to mentally digest every word she said and, for reasons I haven't fully processed, scared.

Timidly, I raised my hand. "Hi, I have so many questions I feel like I need to have coffee with you."

Afterword, she signed my copy of Poster Child under which she wrote her email address.

It occurred to me how comfortingly ordinary we all are face to face.

She said memoir is the most manipulative of literary genres because it's only what you write down.

Somewhere in the midst of this hubbub, I got an email from my aerial class instructor saying I should stay after class to talk about being a part of a show. When it rains....

At this point, there is a big temptation for me to have a panic attack, lock myself in the bathroom, and start obsessively clipping my toenails because it's something I can control.

But instead I am just trying to breathe, remain grateful, and remember that despite what I'd like to think, I am never in control.