I got a drill for Christmas. I am ecstatic.

Why would a woman with one arm be wanting a drill, you ask? Well, aside from the fact that I bookmarked a web site called CharmAndHammer, every time we want to hang anything around here, we have to find someone with a drill. And that someone is generally a man, boyfriend or friend, who is willing to come to the rescue of two gals needing to decorate. 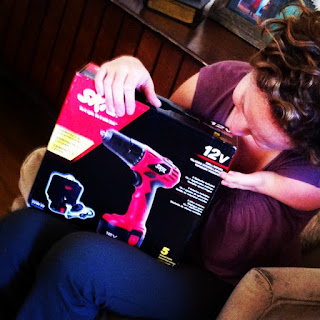 A couple years ago, after I started living on my own again, my sister gave me a toolbox for Christmas. It wasn't anything fancy, but it was the beginning of my home improvement quest. A hammer and some screw drivers can only get you so far, however, and our plaster walls require more power to puncture.

So Little Gen decided to take action, and on Christmas morn, beneath the Christmas tumbleweed, I opened a little red Skil. Several days later, Mountain Guy showed up to teach me the basics. I teetered atop a kitchen chair, balanced a screw on the bit, and before I knew it, I'd put up a coat rack. As I surveyed my work, drill in hand, I felt deliciously happy. I'd made something. The coats were off the chair and the power was in my hand.

On Sunday night, 60 Minutes had a segment on thought-controlled prosthetics. There was a lady who had become paralyzed from a genetic degenerative disease; she could only use her mouth. She decided to undergo brain surgery to attach electrode connectors that were then attached to a mechanical arm. All she had to do was think the arm into action.

Pretty cool, right? The designer was certainly pleased with himself, but I noted that he appeared fully functioning with all appendages attached. I was intrigued, but the fake arm, with all its gears and gadgets, looked really heavy, and its movement was nowhere near natural. I highly doubt it could go into dirty dishwater; not to mention the user had electrodes protruding from her head. I started to wonder if this thought-controlled arm, undoubtably wonderful to scientists and fans of science fiction, was really that practical. Was it something I could use?

At the end of the day, even a thought-controlled prosthetic arm is just a tool, and a tool is only worth the efficiency of its function. Now, if they made a prosthetic drill arm, we'd be talking...