At the beginning of the week I asked Dragon Boy's Mama if I could take him to the zoo.

"Sure," she said, "just make sure they give him a nice habitat."

Before the planned visit to the not-so-wild kingdom, I said we had to walk Keeper because they don't allow dogs at the zoo.

"I've seen dogs at the zoo before," Dragon Boy informed me. I forgot to mention that he is currently the world's leading expert on everything.

"Actually," he continued, "I didn't see a dog at the zoo; sometimes I just make things up." Indeed.

I actually live just around the corner from the zoo. It is quite something to hear a seal bark or a lion roar just as one is unlocking the front door. Sometimes when I'm walking the river trail, I like to peek in on the elephants from the backside of the zoo. I saw them kissing once.

I really wanted to see the new baby rhino, but Dragon Boy was intent on visiting the reptiles first...then the parrots...then the birds of prey....then the sea lions before we even got over to Africa. After the zebras and giraffes, we finally came to the white rhino exhibit. But there was no baby to be found. Apparently he is waiting for his coming out party this weekend.

Up to now, I was having a fairly good day. And then I had to pee. It should here be noted that I was keeping my mobile phone in my back pocket for convenient use of the camera. I don't make a habit of this, but that is really beside the point. I think you can probably guess what happened next in the toilet stall. Unfortunately some of you can relate.

The official story we're going with is that I dropped it in the kitchen sink. As of last night, it was on life support. It went in for surgery this morning, but it's not looking good. I think I'm gonna have to pull the plug. 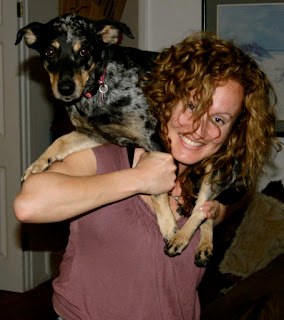 So that is the long explanation for the lack of relevant art in this post. It also may explain why my brain was elsewhere when, later that evening, I went to pick up a pizza and discovered I had no wallet. No problem, I'll just call Dragon Boy's Mama and have her pay with a credit card, I thought. But my phone, which I had remembered to bring, was intermittently flashing on and off. I must have looked pretty pathetic by this time, because the pizza guy just pushed the pie across the counter to me in exchange for my promise to pay on the 'morrow. I accepted his offer, graciously. Well, as graciously as I could--there was precious little grace about me by that point.

Despite the doubtful recovery of my phone, I'm ready to get back on the upside. It's not looking good, though--this morning I spilled coffee on my dog.