So I was at this frozen yoghurt place with the Friars and Co. As if that wasn't spectacle enough––gray cloaked clergymen out on the town with several single gals, one of whom is missing an arm--I decided to challenge Father Daniel to an arm wrestling match.

But then I challenged him to a left arm wrestling match.

He still won, but generously raved about how strong I was. 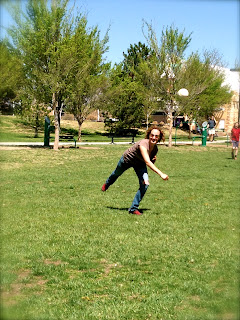 I am getting stronger, not just in my wee arm, but all over. I certainly have aerial fabrics to thank.

But fittingly concurrent with spring training, I've been doing some baseball cross training with Mountain Guy, who is grooming me for...your guess is as good as mine.

[Haven't we broken up? Yes. Have we been hanging out? Yes. Do I want to talk about it? Not really. Let's just say we still have feelings for each other--love, frustration, anger, loathing; there's really not a feeling we don't have at this point.]

MG is polishing my hitting skills. As a kid, I hit right-handed, swinging the bat with my right wrist facing forward. The longer time followers of this blog may recall my technique at the batting cages a couple years ago.

But thanks to MG's eye and pro baseball level experience, I'm now hitting like a lefty, right hand on the front of the bat, swinging like a tennis backhand. And I really cracked some balls out there (not to be confused with busting balls, which I do on the regular; just ask MG).

Our only outfielder, Keeper the dog, was having a blast chasing after wannabe homers. She was a little less enthusiastic about bringing them back, being frequently distracted by a good roll in the grass.

With the temptation to turn on the hibernating air conditioner around 12pm these days, it would seem summer is nearly here.

"Let's rent a kiddy pool for Memorial Day," Friar Daniel suggests. "We can all sit in it."