In the southwest of India is a place called Goa, and on the coast is a town called Benaulim, and close to the intersection of two main streets is a restaurant called Dinha’s. If my world in India were the earth, Dinha’s would be the sun.

Two years ago, when I first taxied into town, Dinha’s was the first place we stopped, even before we’d unpacked. A week or so later, I was having coffee on a busy morning when Tony handed me a bill to deliver. Thus began my volunteer waiting career in India. 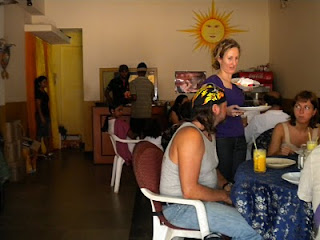 People come to India for many reasons: to seek spiritual enlightenment, to bathe in the Ganges, to put off inevitable job-seeking after college, backpack across Asia, and the like. Fewer, I would imagine, find fulfillment in restaurant food service. But since I’d come with only the goal of having a good cup of chai, I had some spare dream space, and I had, coincidentally, always wanted to be a waitress. I’d never tried because I had nightmares of one-arm incompetence, dropping trays of dishes, and pouring drinks indiscriminately into guests’ laps.

When Pascal [pictured in previous post] called me in the States to ask when I was coming back, I asked if he would give me a job. He reminds me of this yesterday morning, somewhere near the middle of breakfast rush when I can’t remember if the eggs were to be scrambled or fried, and I forgot to tell someone there’s no toast because the power is out again. 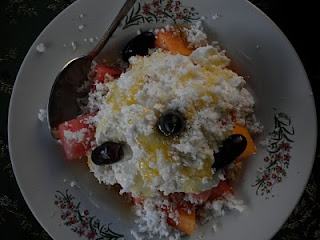 On a sign outside, nearly covered by tree leaves, is written “Dinha’s Restaurant with a Difference.” And it is. There’s no other restaurant in the village or on the beach like Dinha’s. With limited seating, patrons are “encouraged” to sit together, creating a cross exchange of cultures from nearly every continent. The menu has normal Indian curries and rice, but is also speckled with delicacies like banana fritters with rum and prawn coconut soup served in half a coconut shell.

And I’m pretty sure there’s not another restaurant in town with a one-armed western girl working without pay. There’s always an adjustment period when people look up in surprise as I appear at their table, asking in amused incredulity, “Oh, are you working here now?,” in an Irish or German or French accent. Sometimes takes a minute for them to realize I’m not a street urchin. Favorite moment: when a westerner tried to give me his order in broken Hindi. I think I may have ruined his cross-cultural experience.
------------------------------------
Though I’ve been to India twice, I haven’t seen much of it. I already found what I didn’t know I was looking for, and I’m amazingly content to sit put. Two years ago, we took a glorious open-air train ride to Humpi, a favorite for spiritually seeking westerners; but somewhere around the elephant that gave out trunk blessings for two rupees outside the temple, I found myself wondering what was happening back at Dinha’s.


And I missed Pascal. Slender and quiet, he is the best restauranteer I’ve witnessed, but if you tell him that, he says, “I don’t know,” and tries to change the subject. But it was his smile that I noticed first. It’s big and toothy, but like the rest of him, quiet, like he’s more amused by his own secret thoughts.
Pascal is fast and proficient in the dining room, easily handling all eight tables alone. And he's always calm, never apparently rushed, setting a tea cup down without a tinkle or a slosh. If engaged, he’ll stop to chat as if he’s got nowhere to be, turning one sandaled foot out, empty tray casually held in the opposite hand; but otherwise he’ll come and go, your food seeming to appear on its own. 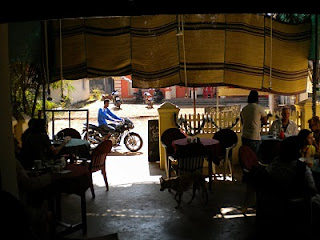 The structure is shabby, the sound system broken, the kitchen enough to make a health inspector cry, and the two colors of salt and pepper shakers not indicative of their contents. One must shake them and say a prayer for the desired seasoning.
But there is something intangible, a magic that keeps you for hours, swaddled in contentment. If you don't pull yourself away, you'll spend the whole day.
And this is why, I believe, people keep coming back. That, or the only fresh pressed coffee in town.