When one of her unicorns loses a leg, 6-year-old Arwen remains nonplused.

"Oh well," she says, "you can still do things without a leg." 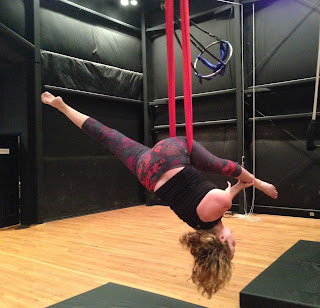 Several years ago, Arwen attended an outdoor aerial gig in which I performed. Her mom tells me that when Arwen saw me on the fabric, she was hooked. Every time I see her mom, she reminds me: "Arwen talks about you all the time...she thinks you are so cool."

Last week, at the circus arts studio that her mom runs, Arwen reminded me herself when she walked over to me and said, "I like your little arm. I think it's cool."

In a nutshell, this is what I do. Or, it's what I want to do: to let little girls (and boys) know that having one arm...or leg or ear or toe is OK, and more than OK...it's cool.

I'd say it's my vocation, but that sounds like taking too much credit. It's more like something that happens when I'm around. And also, I guess, because I don't just sit on the couch and eat potato chips. No offense to those who do, but I just don't like potato chips that much. PS: If you can eat potato chips with your toes, it's time to get off the couch...

But of all the emails I compose, meetings I attend, formal teaching I do, I really believe this is the most important work--the work of being fully who I am, being 'cool' in my body.

It's not the sort of career one generally goes into. Not a lot of informational trifolds in the career counselors office on being one-armed. Not much money in it, I guess.

But when a small person like Arwen, with so much love and life ahead, reminds me what I'm doing here, it feels right. It's simple, sometimes aggravatingly so, but I can't think of anything more rewarding I'd rather be, or do.