This goes out to the dreamers.

On Monday I received a long-awaited reply from the second literary agent whom I'd queried for Confessions of a One-Armed Girl. She regretfully informed me that she was unable to take me on as a client at this time. I expected this, but because there's always that chance that this is the one, it was a letdown nonetheless. 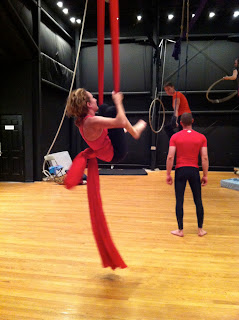 But the hardest to take were her critiques to my manuscript, which to her credit, she'd actually taken the time to give. Too much back story, she said, and not a clear story arc. What little air was left in my balloon of hope quickly deflated.

Concurrently this week, I am awaiting reply from an East Coast therapeutic riding instructor training school. I applied to their Fall certification session, which was not unlike the process of putting a book proposal together. Apparently, the older you get, the more paperwork life requires.

While at aerial practice last night, I received an encouraging message from Admissions that, though final decisions have yet to be made, indicated I was looking good.

Perhaps that's what gave me the extra oomph to get through class. Near the end, I was working on a one-handed straddle up, pulling my legs up and over my head. More advanced aerialists stood around brainstorming adaptive techniques.

"You're going to do this," they said. "Don't you see the difference in your strength and ability since you first started coming?" Jo asked incredulously. Sometimes it takes other people to see yourself.

Driving home, muscles tripping on endorphins, I considered the difficulty of dreams. It's not just all the work that goes into getting where you want to go; it's the exhaustion of not knowing if you'll ever get there at all. It's emotional wear and tear.

Will my book ever get published? I wonder, as I berate myself for lost motivation and belief.

This morning while perusing Amazon instead of working on my post, I stumble on a novel written by a local writer who is probably eight years my junior. And though I want the book to be horrible, the plot intrigues me. But mostly I'm jealous of her success, and immediately assume she's much more focused and diligent in her career, that she probably doesn't drink sodas or watch The Colbert Report. I think she surely gets up each morning in the muse for writing, stories pouring out unhindered by dishes that need washing and a dog that needs walking.

But the truth is, following your dreams doesn't always look like that. Sometimes it looks more like a pitt stop on the dream raceway, recovering from the wear and tear. Sometimes you have to toss the manuscript and start over. I don't know if it's that bad, but I could sure use a good editor, someone to help put an arc in my story. Or maybe I need a different agent. Dreams often require some tweaking. But if they're real, and you stick close to the source, you can't give up. Dreams won't let you.

Today, I think I'll start with some journaling. Then I'll probably have to wash the dishes.