When asked what I was going to “do” in India, the answer I settled on was: “I don’t know.” And that was nearly the truth, though completely insufficient and irresponsible for most American ears. For just reason, I suppose; imagine asking the first settlers what they were going to do in the New World, if they replied, “Oh, I dunno, guess we’ll see when we get there.” Though I’m fairly certain starving to death and introducing smallpox wasn’t on the agenda.

Truth is, I had some idea of what I might do, but I had no concrete goals. Last time I came to India, I only wanted a great cup of chai, and that I accomplished exceptionally well. I’ve had some time to mull it over, however...and so, my current ‘to do’ list for India is, in no particular order,

3. Visit an orphanage for handicapped children

The first is cliché, I know, but I would argue that everyone should live a good cliché, now and again. It’s good for digestion. The second seems doable (according to Mikey Man, who claims to drive routinely one-handed on the scooter, I can only assume, because he's been here so long, driving in India now bores him). The third just seems the sort of humanitarian thing you do in India. And I am happy to say, I accomplished it this past weekend. 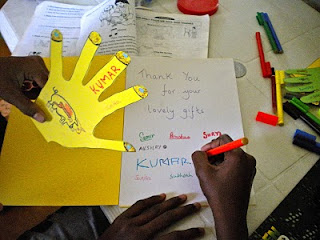 I met a nice couple at Dinha’s who knew of an orphanage for handicapped children, which incidentally, is also when I decided it would be my third goal to visit such a place. So Friday last, friend Cameron and I set off for Chorao Island. Yes, the orphans live on an island which, I suggested to Cameron, could be to keep them from escaping. I saw Annie, ok.

The drive took about an hour, or maybe two; I’m not certain because I was in the process of acquiring a heat stroke on the back of the scooter. We stopped for a $6 tank of gas, then onto the highway at 40mph, Cameron wearing a required helmet as the driver, me wearing nothing because it’s not a problem if the passenger falls off the back and gets run over by 30 motorbikes from behind. In India, you stop asking why.

We stopped in the capital city of Panjim, rumored to be the location of a fancy bookstore. After asking 20 people along the road for directions(allow for authorial exaggeration), and walking several blocks [it was just like the Amazing Race...before editing; wonderful, glorious editing], we found it. Cameron was a kid in a candy store as soon as we entered; it’s too bad there’s not much allowance for baggage on a scooter. 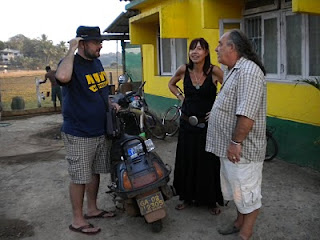 New books in tow, we were off to the orphans, who mostly turned out not to be orphans at all, but boys who just needed another place to live. And though several had minor cognitive handicaps, they were not without ability (even exceptional artistic skill). None seemed particularly in need of inspiration, and I’ll admit, I was a little disappointed no one was missing arms or legs.

Meanwhile, I was having trouble remembering my name, and spent most of the afternoon on the couch, inhaling water and wondering if I might faint. Busy drawing freehand cartoon replications and decorating hand-shaped construction paper greeting cards, they had little time for interest in my small appendage. Once in a while, I caught a shy smile, and a glance of what I’m sure was pity, cast in the direction of the invalid foreigner in their living room.

We were treated to a wonderful meal of curry and homegrown rice, and to the company of big-hearted people in a home full of hospitality. And thankfully, after some reviving coffee, I was able to get back on the scooter without assistance. 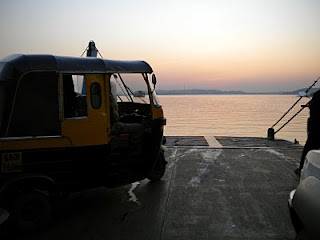 The drive home was darker and cooler and I contemplated inviting some orphans to come visit me next time.