I have a new toy.

I took my bike in for a tuneup and decided to splurge on an attachment that allows your pet to run along with you on your ride. I say 'pet' because who am I to judge if someone wants to ride down the street with their alligator in tow.

I promptly attached my dog––and it works amazingly well; Keeper seems born to run next to a bike. 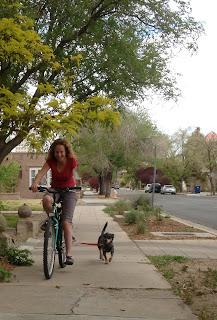 But the best part is that I can maximize Keeper's exercise while minimizing mine––and we can both have a lovely time.

I've had the same mountain bike since I was in my early teens, when my parents bought it for me. So, considering, it's held up very well. It was losing a lot of air from the back tire this spring when I brushed off the cobwebs to take a spin. But the nice people at a local bike shop pumped some kind of goo into it, so now it works like a champ. I almost feel like I'm floating.

From what I can read of dog language, Keeper loves our bike outings, too. At first, she was a little scared of the bike itself; then she couldn't figure out which side to run on, but once around the block and it was like she'd been born on a sled team.

She only forgets her place once in a while when she tries to run down some pigeons or another dog eggs her into a barking match. I think that she thinks she's working; I won't tell her that it's mostly for her benefit, not mine.

I'm feeling accomplished as this week comes to an end. After much reading, editing, rewriting, and minimal hair-pulling, I got my proposal off to Kimberley Cameron. Then I emailed it again when I realized Kimberley has two 'e's in the address. Now it's just the waiting game.

But things are moving. The wheels are turning. Regardless of what happens, I'm working on the book again, and that feels good.