Manicures: I hardly ever bother.

I'm one of those people, actually the only person I know not working as a mechanic or in the oil fields, who perpetually has dirt under her fingernails. I really don't understand it. I will clean them out, and then without fail, look down five minutes later to find them magically refilled. 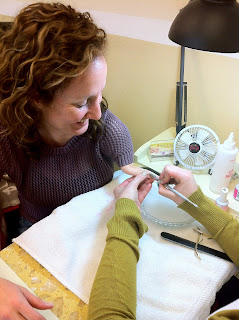 It was more understandable when I was working in a barn with horses and, well, dirt. But not only are my nails constantly in a state of uncleanness, I hardly ever have nails to begin with. With all the tearing and breakage, if they grow past the end of my fingers, it's a miracle. And generally a very short-live miracle at that.

But recently a coupon for a gel manicure came across my desk. If you are unaware, as I was until like the day before yesterday, gel polish is to regular polish as Fettucini Alfredo is to Kraft Mac 'N Cheese. It actually stays on your nails for a significant amount of time before it starts chipping. I know this because last fall I got a gel pedicure that lasted, and looked good, for at least a month. This is good news for those of us who are likely to chip polish off our nails getting into the car when leaving salon.

It never hurts to pamper your hands. I know this as well as anybody, and yet I probably take less care of my hands than most. Finneas doesn't suffer much from the neglect because he is generally protected from the elements and any major physical labor beneath a sleeve. But the bigger arm suffers the majority of the work load with little complaint. And that's why I often fail to give it some well-deserved attention.

So I decided it was worth a shot. Perhaps a gel manicure would actually stay on my rebellious nails, even helping them to grow stronger. I called my BFF on the way to the salon to tell her I was running late, but it later occurred to me that it might be a good thing since she had twice the nails to cover. This is the same BFF that enjoys asking manicurists if her friend with one arm gets a 50% discount.

My manicurist didn't seem too put out that I was late, and if she noticed that her client had only one hand, she didn't let on. As she was finishing up the first phase with my right hand, I got the feeling she was going to just ignore Finneas. So I explained to her that he would feel mighty left out, and I would never hear the end of it, if he didn't get the same special treatment. She smiled. And we were friends. 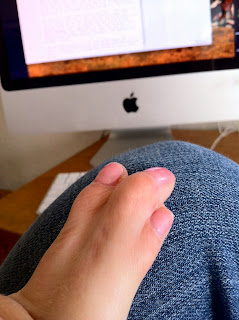 I'm one week in, and still no chip to be found. The only thing I regret is having gone with Barbie-goes-to-the-prom pink, with glitter, of course. But it feels nice to have nails.

I may not deserve half off, but I still think 20% sounds fair.