While at my parents’ house, I took the opportunity to reacquaint myself with an old friend. 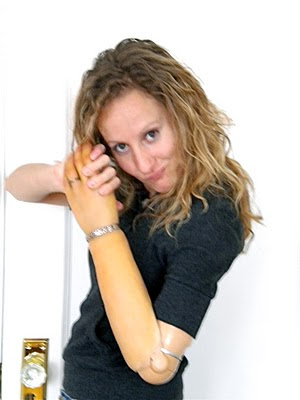 I’ve been telling people for years now that my fake arm lives in a closet at my parents’ home…and there I found it, somewhere near the back, in a bag, where I’d left it since they moved into that house five years ago.
Calling my prosthetic arm a ‘friend’ is somewhat of a stretch. It’s heavy and hot to wear, and it requires a rubber strap to go over my chest, under my arm, and snap in the back, to stay in place. I basically have to bathe my small arm and left shoulder in baby powder to deal with the humidity inside. At best, it’s overrated; at worst, it’s a beast.
Here’s some likely useless information to tuck away: innovation in prosthetic arms is not so great in comparison to legs because, overall, more people need legs than arms. The market just isn’t there. And strangely, more funding comes in for NASA.
My very first prosthetic arm was archaic, if not scary, but we’re talking early 80s here. The ‘hand’ was what you might call ‘utilitarian'—though what one is expected to accomplish with a small cleated rubber claw is still a mystery to me. My parents took me to special classes to learn what I could do with it, like pick up small blocks or…honestly, I can’t think of what else it did. Obviously, I wasn’t being groomed for beauty pageants: “Please welcome to the stage, Little Miss Reptile Arm, who will be sharing with us an audition monologue for Alien 2.”
When I first got my current arm, maybe ten years ago, it was state-of-the-art as fake arms go; custom designed for me by a very kind, very patient man called Jon. I was no easy client. I’d been down that road of tears and slurpies too many times to harbor any Luke Skywalker fantasies. I came to Jon from the throngs of the post-prosthetically disillusioned.


But Jon was, as I mentioned, patient. He was big and tall and soft-spoken with a deep voice. He wrapped the cool, damp plaster casting around my small arm slowly, his huge hands deliberately smoothing out any bumps or roughness as he went…
Break. I’m not sure that was headed in the direction I intended when I decided to write about prosthetic arms. Maybe I’ve just been wrapped in one too many plaster castes; but that’s a story for another time.
Anyhew…Jon really listened to me and made some key adjustments that greatly enhanced my prosthetic-arm-wearing-experience. We even flew to Texas where I modeled for a lovely blond woman who spray-painted the rubber ‘skin’ to match my own skin tone, freckles included. I remember how she used almost every primary color to create my personal hue, slightly tanned white girl. And I only had a small decision-making crisis when I had to choose the length of the nails that would remain the same for the rest of all time; I decided against the can’t-type-on-this-keyboard-but-I-don’t-care-cause-my-nails-are-fabulous look, and went with something more conservative.
So considering the tightrope we were walking between aesthetics and functionality, the end result looked good, really the best it could. Finneas could operate the hand with a rocker switch from inside the hollowed out arm, like a tiny man behind the curtain. Unfortunately the forearm was still the size of a male lumberjack’s because it had to hold the motor inside.
Would have been perfect for Jon.


-------------------------
Considering I’ve spent most my life learning to do things without it, I have considerable difficulty delegating tasks to my prosthetic arm. Currently, it is proficient in crushing soda cans, styrofoam cups, and most other temporary liquid holders which you would rather not smash whilst holding said liquid in its mechanized fingers. It is also perfect at scaring the bajeebers out of people while lying inanimate on my bed, or being carried around the office, peaking disembodied around corners and tapping unsuspecting victims on the shoulder, as Joey once proved. And I imagine it might serve as an effective weapon should I find myself in a position requiring hand to hand combat. Sorry.
I’ve worn the arm regularly by times—I have to admit, primarily so that I could make use of the long-sleeved section of my wardrobe. Consistency is the key: I once wore it every day to a class in college, then one day went without. No one said anything, but I could see their confused eyebrows reviewing the laws of nature as I took my seat.
But considering the hassle, I’m pressed to decide if prosthetic limbs are an asset or an additional handicap. I know the more I get comfortable in my own skin, the less patience I have for the arm.
There are new developments, of course. The legs they have for runners are pretty kick ass; and I once saw a prototype for an arm with a mechanized elbow that could allegedly throw a baseball—helpful if you’re a pitcher, I guess, but I’d just like to be able to pick up a plate of food. And what happens when your mechanical elbow goes on the fritz and you find yourself in the middle of an involuntary prosthetic seizure? That can’t be good in a business meeting.
I recently saw a news story on a scheme to connect electrodes from the prosthetic arm to your muscles, allowing your brain to dictate movement. I still have my doubts. No electrical wiring is gonna keep up with the speed of a brain. What happens when you forget what you were gonna do with it by the time your arm gets there. It’s amazing the ingenuity it takes to come nowhere close to the original design.
And who needs arms anyway? I think my artificial appendage will remain in the closet, aside from the occasional show-and-tell or practical joke engagement. It’s perfectly capable of living a meaningful existence detached from my person.
Plus, another arm isn’t good for my job security.
OneArmGirl
Posted by OneArmGirl at 7:08 PM 1 comment: